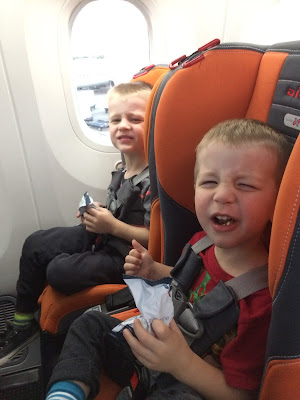 We have been back from the States for two weeks now. Stephen flew back on his own a week earlier than the rest of us, meaning, I (Alisa) had to fly with the two little guys by myself. Flying with two kids is difficult, even when I have Stephen with me, but it's more nerve-wracking when I realize I have to carry everything, plus get the two little humans on board and keep them happy.  I kept praying and had lots of people praying for us on the trip back.

How did it go? It wasn't great, but it wasn't terrible. I view it kind of like labor, you have to get through it for it to be over. It's not going to be fun, but you have to make the best of it.

I checked as much as I possibly could and kept our carry-ons to a minimum. I carried on two carseats, one small backpack and my purse. Thankfully in Chicago you can take a cart all of the way to your gate, so I was able to push everything there. I only needed to get everything onto the plane.

Other than Silas falling over right by the toilet in the bathroom and the boys getting pretty wild before boarding (they miss their naps and the flight is late in the day), we survived the airport.

The flight attendants were really nice. They let me get on the plane a bit early to get settled and even gave the boys pretzels while we were waiting. I was thankful the flight was not full and no one was sitting in front or behind us. The boys always seem to push or kick the seats in front of them, so it was nice that I wouldn't have to constantly convince them to stop.

Once we got on the plane, the boys were occupied watching movies. I had talked to them before about what we would do once we were on the plane. I told them they could watch one show, eat supper, I would read them a book, and then they could go to bed. This worked out pretty well, although, neither were too crazy about eating their food since it arrived around their normal bedtime. After eating a few bites of food Silas started having long stares and fell asleep on his own pretty soon after. Elisha finished watching his movie, wanted a book read, and then was upset when I suggested he try to sleep. He threw a bit of a fuss saying that he was not tired and he was not going to sleep. Five minutes later he was snoring! I was able to get a bit of sleep as well. 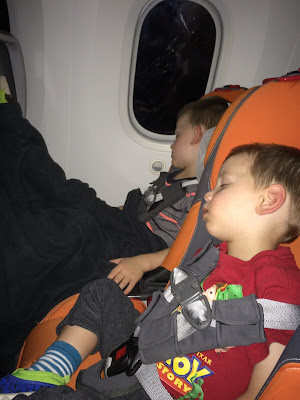 Near landing time, Elisha woke up, but only ate one part of his breakfast. I tried to get Silas to wake up, but he wasn't having it. He finally woke up enough that he was able to walk once we landed.  He was really clingy but I kind of figured this would happen since Silas usually wants some snuggles after waking up. Sad thing is, we needed to get off the plane and I didn't have time to snuggle him. One of the flight attendants carried one carseat off the plane for me so I could hold Silas' hand, which was nice. Once we were off the plane and on the jet bridge, I had to take the carseat and could not hold Silas' hand any longer. He just stood there crying and did not want to move unless he held my hand. I tried to get Elisha to hold Silas' hand, but Silas only wanted my hand. Sadly, all I could do was coax him to keep walking behind me and telling him that he was ok. He did this all the way through the airport and to the line for customs. One thing I knew from having crying children in an airport before, is if your kid is crying, they will bump you up to the front of the line. This is exactly what happened. One security guy, as he opened up a lane for us, even said, "Well done, dude." to Silas as he walked by crying.

I got another cart and loaded all of our baggage on it. Now I could hold Silas' hand, so he was fine after that. We made one final bathroom stop and then met up with Stephen who was there to pick us up.

You never really know how bad a trip will go. Praying, talking to my kids beforehand, keeping carry-ons to a minimum, and just keeping calm in general made it a lot more tolerable. Thank you to everyone who was praying for us! 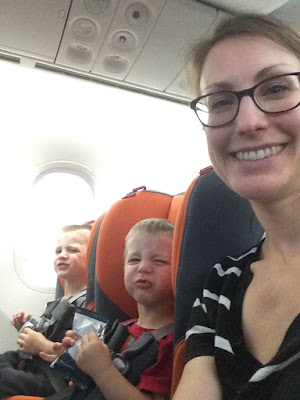