Our 10th Anniversary and Holiday in Italy


On September 1st was Stephen's and my 10th Anniversary. We are very thankful that God gave us these years together. For part of our celebrations we had booked a holiday (vacation) to Rome, Italy last December. We were going to go over our anniversary, but you could save more cash if you waited a week later, so that's when we booked it! Since the camper we were staying in housed 5 people, we also decided to invite Stephen's sister Michelle to come with us. We were thrilled when she agreed! 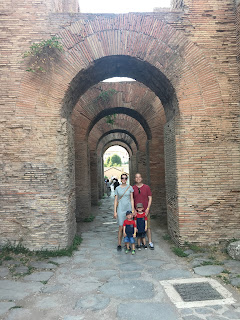 We stayed at a campground outside of Rome. It was really nice as it had two pools (a shallow one for kids, one deeper one), a restaurant, pizzeria, gelateria, and grocery store. It was really nice. Getting into Rome was not difficult as there was a shuttle from the campground going to the train station but getting back to the camp was more difficult as you had to use the bus system, which was very hard to navigate. Once we knew this, it got easier as time went on.

Two days of our week were taken up with traveling, just getting to the campground or getting back to the airport. We relied on public transportation there (which was wonderful as we did not have to bring carseats) and booked a shuttle back to the airport on the way home. We were glad we did as if we would have missed one train (which could have been very possible), we would have missed our flight.

The first day we hung out at the campground. It was nice and relaxing.

The next two days we went into Rome to sightsee. The first day we saw the Colosseum, Forum, Palatine Hill, Trevi Fountain, and Circus Maximus. The second day was my favourite as we rented bikes and cycled on the Appia Antica (the original Roman Road that still has some of the original cobblestones. The same stones that Paul and Peter traveled on to get to Rome!). It was so much fun. The little boys had fun riding on the back of Stephen and my bikes as well. After our bike ride, we had the best pasta lunch we had during our stay in Rome and then visited the Catacombs of St Callisto. I was not sure how interesting it would be, but it was close to being my favourite. I was so glad Michelle had suggested we go there. What was even better was that our tour guide shared the gospel with everyone in the tour! It was very refreshing and inspiring with not only us cheering this man on, but other Christians who had gone on before him, cheering him on as he witnessed where they were buried. Wow!


The next day, we were getting ready to get to church when WHOOSH! An EXTREME downpour of rain hit the camp. It lasted for hours and actually ruined the pool at the campground. We weren't able to go anywhere. We were tired from all of our travels and sightseeing, so it was nice to rest, but we were really looking forward to getting out again. The rain forced us to stop. The next day it was supposed to rain too, so we figured out the bus system to get to a nearby mall. We walked around the mall most of the day. Not what we originally planned for our trip, so that was disappointing, but we were glad to get out of the camper.

The last day Michelle wanted to see a few more things in the city. We just wanted to relax and soak up the sun by the pool (fortunately the campground had another pool we could use even though both of theirs had gotten ruined). Michelle came back right before dinnertime so we were all able to go to dinner together and play a complementary game of mini golf. It was nice.

All too soon the holiday was over. We were so glad we had this time to relax, even though it was scheduled at a time we were not really wanting to travel again, I think we needed it.