A new ministry has started this autumn at the church. Its an after-school program on Thursdays for 5-10 yr olds. 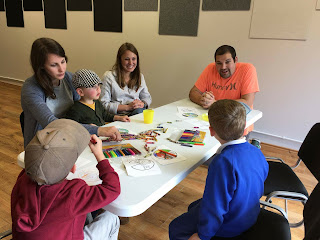 It has been pretty slow in starting. Most schools said they would hand out our flyers, but we had one school that would not put them out at all. Even in spite of this, we have had a few children come so far.

At the club, we start with a snack and helping the kids with homework. Then we do a craft, a Bible lesson, and memorise a verse by singing a song that goes along with the verse. We end with playing games. 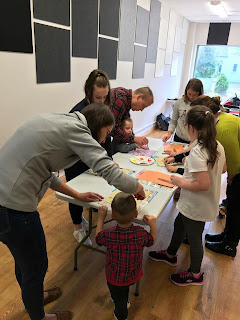 Some of the kids we have say the funniest things. One child, as we were explaining the creation story said "When God created the earth, he took all of his rubbish and threw it down here." We all were laughing at this viewpoint and used it as an opportunity to explain that God called it "good".

For the most part Luke and Tiffanie have organised most of it as Stephen and I have only been there a few times with us constantly on the move. We are really grateful for them as they have really had to get things organised on their own.