On the 10th through the 14th of July, we held our second Holiday Bible Club (VBS). This year it was cave themed, so we transformed our church space into the best cave we could. It was a lot of work, but we felt it turned out pretty well. 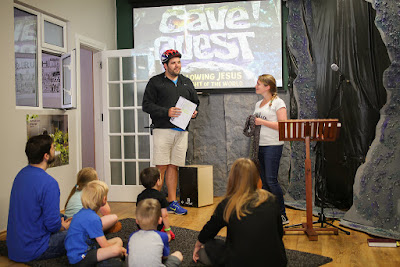 We all worked hard at inviting children who were in the correct age group. A lot of parents said that they had already signed their kids up for different camps. There are a lot of camps going on at the same time. We had decided to have our camp fall between the two GAA (Irish sports) camps, but we knew that we still couldn't avoid them all. There are so many opportunities for children in that age group. Also, some parents did not like it that we were a church and that our advertisement included "Bible lessons". Yet at the same time, we did have a few families that seemed a bit interested, one who even approached me about the club (unfortunately they were unable to make it). We really had no idea of who would come. We texted everyone who had come to our Kids Club or Holiday Bible Club last year.

The first day, we only had two kids (besides our own). This was disappointing to us, yet I was encouraged by the two children who came. We have known them for four years and were so glad that they came to Holiday Bible Club for the first time.

Every day we gained one more child at our club! No random drop-ins though; all of the children came because someone was friends with their family.

All of the children really enjoyed it and I think all of the leaders did as well. We had great music, games, snacks, crafts, and lessons. Even though we were tired, we were all a little sad when it ended.  We had two parents contact us later telling us how glad they sent their children and how their children really enjoyed it. We hope that they are able to tell others about this so that we can get more numbers next year.

Here are a few pictures. Sorry, it is just my kid's and their friend's faces in the photo. We were not sure if any other parent would be ok with their children's picture on the internet. Hopefully, this will give you an idea about what we did.