On Palm Sunday Kontaktmission always has their one day conference where most of the missionaires come and supporters from the area. It is like a mini- ICOM. Booths are set up and there is music and speakers. Elisha went to the children's program for the morning and afternoon. He loved it. Silas slept in my arms basically all morning. In the afternoon he just wanted to be outside, so I walked him around a lot. It was nice to see everyone and to hear the speaker. You have to listen on headphones to a translator as the conference is mostly in German. 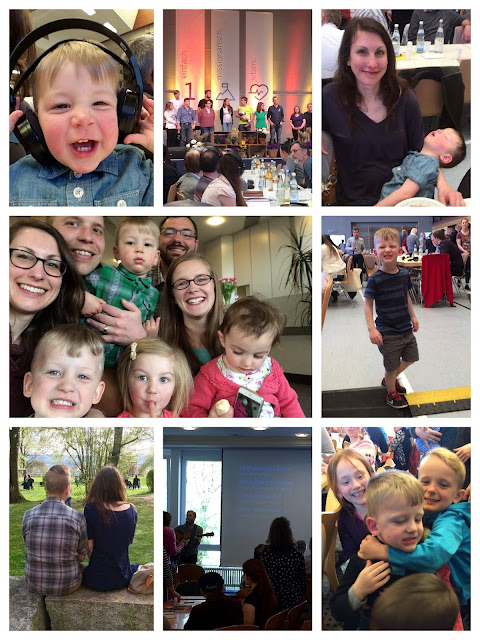 After the conference, most of the missionaries headed over for the four day (we were only there for three days) team retreat. It was so nice and refreshing to catch up with everyone. Lots of people mentioned it was great to just talk and laugh together. It was freeing. There were also sessions during the day talking about marriage, leadership behavior in different cultures, how singles and married couples should be treated on the mission field, and different insights on how different cultures work.

I've realized I think a lot differently than the Irish culture does, so that is probably why I have a harder time feeling at "home" here than what Stephen does as his personality closer fits the culture here.

Once we flew back to Ireland, Elisha turned to Stephen and said "I'm a little sad that I lost Germany." I have to say, I felt the same way a little bit. We had a wonderful time in Germany. Made great connections again, and are looking forward to it next year. We are so glad that we are with an organization like Kontaktmission that not only cares about our ministries here, but also cares about us.
Email Post
Labels: Conference Friends Germany Kontaktmission missionaries Retreat