To Those Who "Love Rainy Days"

Every once in awhile, I see a post on Facebook. A picture of someone curled up with a hot drink and a book with the caption that says: "I love rainy days."

It almost makes me sick.

The thing of it is, I used to say that. I used to believe that.

This is what I find when I look up the weather: 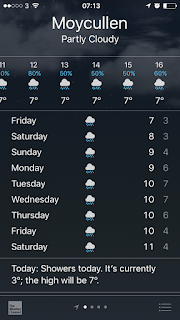 I feel the people who claim that they "love rainy days" would no doubt, not love this many rainy days. There is hardly a time where I see a post that says "I love rainy days" and there is a picture of a person trying to get their groceries in the car, or having to walk a few blocks to pick up their kids from school, or even doing something pleasurable like going on a hike or a bike ride. All of these pictures that accompany the statement are taken inside, thus, not really experiencing the rain much at all.

Anyway, I have come to cringe when I hear the phrase and regret the remembrance of saying it myself at one point in time.

There is so much rain here and the temperature here doesn't vary much either. In January, I was delighting as my kids were riding their bike and scooter outside and even though we were bundled, we were pretty comfortable out. Then my thought process continued as I remembered that there sometimes isn't much difference between temperatures that day and temperatures in the summertime.

In fact, I have just recently realised Silas does not understand short sleeves. Several times recently I was putting an undershirt on him that had short sleeves and he starts saying "No!" and "Help" as he looks at me frantically and pulls and pulls at his sleeves that are supposed to be short. Poor little guy. Long sleeves and layers of clothes are normal for this little guy.

I sometimes have to put my children in plastic bags. Everyone does this. It's "normal". 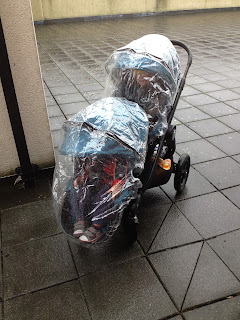 This has become the new normal for my children going outside to play so that they don't completely ruin their clothes, keep dry underneath, and so that I don't have to remember to bring along a towel every time we go to the playground (as the playground equipment is usually wet). 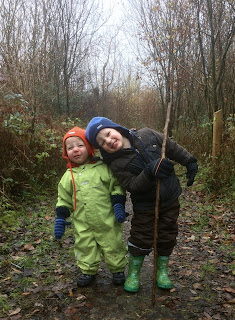 So, we deal with the rain here. I'm not always the happiest about it (can you tell?), but I find there are better ways to deal with it here than what I had in the States. Also, with the temperatures, I do miss the warmth, but since I don't really like sweating, this weather probably does actually suit me best.