This last weekend, we drove up to Larne,  Northern Ireland for a weekend away with our Drogheda Presbyterian Church family. It was a 4.5 hour drive for us each way. We were wondering how Silas would do with the drive as he is usually asking to get out of his carseat once we get to the outskirts of Galway city, but he actually did great. The boys only had one argument on the way there. There were more on the way back (also a time where they were both in tears when no one knew why, even themselves, poor guys), but they also slept more on the way back as well.

It was so great to see everyone. We were able to catch up with a lot of people and make new memories. John and Sandra Woodside also stopped by as well as our friend Anna and her husband, Jonny. It was great to see them as well, even for a short visit. 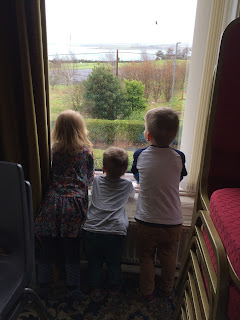 The place we stayed at looked out over the Irish sea. You could see Scotland from it on a clear day. Pretty sweet.

Stephen led music and led the talks each day. He spoke out of 1 John 4. He did a nice job. 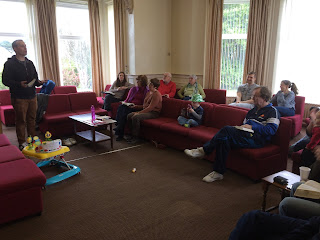 We miss our Drogheda church family. We are so thankful that we were able to spend our first year and a half in Ireland with them.