We held our first Holiday Bible Club (or Vacation Bible School as it is in the States) over the 18th-21st of July in our church building. It turned out to be a really nice time. We had about 11 children attend.

Thankfully we had plenty of help for the four days. The curriculum was supplied for us through Child Evangelism Fellowship who our friend, Helen, works for. She was also able to help all through the week. We had our intern, Ben, and friend Matt there to help as well. Senja, one of the moms was able to come and take over snacks and clean up for two of the days. Everyone turned out to be pretty busy.

"Run the Race" was the name of the curriculum we used. We made all of our games, crafts, and decorations Olympic themed with the Olympics coming up this year. The first day we had the torch lighting ceremony. We just had a crepe paper hand torch and when we "lit" our fake flame one of the kids said "That is so cool!"

Every morning, "Coach Ben" would lead the children in warm ups. Then they would play a few games that Matt had put together. Archery was one of their favourites.

After games we had snack time. Juice, fruit, popcorn, and biscuits were provided. It was nice to sit down with the kids and just see what they would have to say.

Lesson time would come around next. Helen taught the first day, then Ben, myself, and Stephen. We all talked about the Race that Jesus ran for us, how to start the race that God has planned for us, and running and finishing well. After each lesson we would have a Bible memory verse. We each presented it in a creative way to help the children memorise it. After all of this, the children would find a leader to attempt to recite the verse to. A lot of them did it!

Stephen wrote melodies to each memory verse. We would sing the one from that day and from the days before. Also, we sang the Hillsong song, "Run" as our "theme" song for the week. The children were very enthusiastic about the singing. They would all dance and yet they would all keep singing as well. They also enjoyed actions. 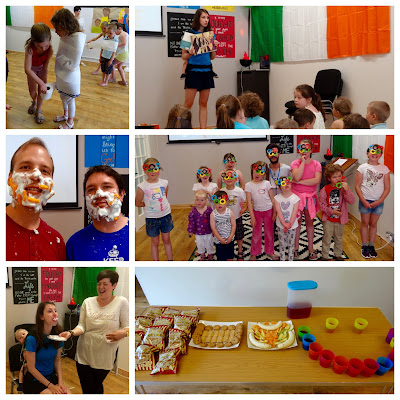 After the song time I had planned a craft for everyday of the week. The first day was an invitation to their parents to attend the medal ceremony at the end of the club. The second day we were to "fix our eyes on Jesus" so we made glasses that were Olympic rings. The third day we made a running finger puppet and the last day we made paper laurel wreaths for the children to wear on their heads.

Matt would have a few games ready to wrap up each day and then Ben would do a "cool down" and go over point totals.

On the last day we did things a little differently as we wanted the parents to see what their children had been doing in club. The children sang the songs while their parents were there and Matt had them play a game together. Then we had the medal ceremony where each child got a medal for something we noticed they had done well at through the week. After this we had refreshments for the children and parents.

All in all it was a great week. A couple of parents inquired about attending Sunday services. Of course we welcomed them to join us.  We look forward to trying another Bible club next year. 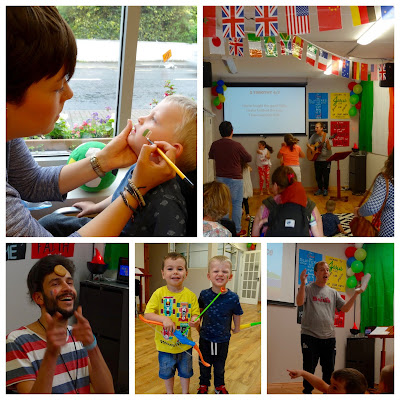