We had our last Kids Club meeting two weeks ago. This year we had a lesson and a party to wrap things up. 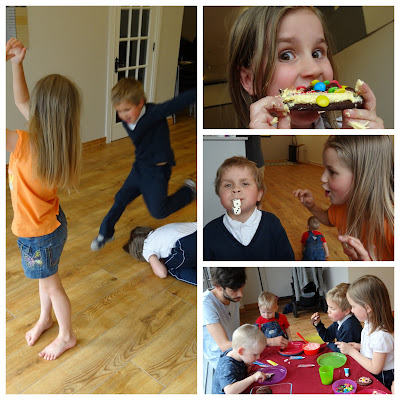 We played a few games. The first game we played was the hula hoop game where you all have to hold hands and pass the hula hoop around the circle. The next game was a hula hoop race where you had to roll the hula hoop across the room and back to where you started. Then we added different obstacles to it. The third game we played was called Rock, Tree, Bridge. The first person is the rock and had to run a few steps and then get down into a ball. The second person had to jump over the "rock" and take two steps and become a "tree" where they had to stand tall. The third person then had to jump over the "rock" run twice around the "tree" and then become a "bridge". The first person then had to run twice around the "tree" and then go under the "bridge" and become a "rock" again. This went on and on until they reached the other side of the room. They seemed to like this game and we timed their progress. They kept wanting to switch what "job" they did. We also played a game where a person puts a popsicle stick in their mouth and then has to try to balance five dice on the end of it. The kids were almost all able to to it. Then we added in a twist. The person has to try to balance all five dice on the end of the stick while the other kids have to try to make the person laugh (without touching them). This turned out pretty funny. It was fun to see them try to concentrate with the distraction. The last game we have done before and this is the one they asked to do again. It was a biscuit (cookie) decorating relay. The first person runs down and ices the cookie. Then the second person puts M&Ms on it. Then they have to put sprinkles on it and a smiley face. Then to win the game, they must eat the cookie. I asked them if they wanted to work together at this or do it individually, and they said "individually". This was a bad idea as it just seemed to be too much cookie (and frosting and candy) on the cookie in a short amount of time. So, if you are thinking of doing this game, make sure kids will work as a team instead! We ended up ended up decorating and eating cookies at a more leisurely pace!

I really liked the cookie recipe I used and the frosting to make them. I made Chocolate Sugar Cookies. The dough was pretty fiddly to work with, but they actually did turn out excellent, so I feel like they were worth the tiny bit of more hassle. I followed the baking times and they turned out perfect. They were not too hard so that they were bricks and they were not too soft so that they would be falling apart when you frost them. I like it when things actually turn out! The frosting was so nice and fluffy. It was a buttercream, but it just seemed lighter than other kinds that I have made before.  Here are the links to the cookies and frosting if you would like to try it as well.

This year we went through the book of Exodus and also stopped for a bit in Leviticus, Numbers, and Deuteronomy. We use the Treasuring Christ curriculum. We like it because they connect every lesson to Jesus. Also, it is easily adaptable to meet our needs.

We didn't have the numbers we wished we had in Kids Club this year. We are thankful for the kids who were able to come and feel like they really looked forward to it. We feel we need to change something (day, time, ???). We are in prayer about this and hope that you will pray along with us as well for what we should do.